To share your memory on the wall of Howard Hickerson, sign in using one of the following options:

Howard, son of Bill and Marie Hickerson, was a native of Tennessee. After High School, Howard joined the US Coast Guard. He completed his education receiving his Master’s Degree in Industrial Arts and Engineering.

He met his wife, Juliann DeKoning, while on a Coast Guard assignment in Massachusetts. Judy preceded him in death in October 2015.

He was also preceded in death by his parents, Brother, Maurice, and Sister, JoAnn.

Known as “Buddy” to his family, he collected coins and stamps and studied the Civil War. He was very much a Historian of the Civil War and a guest speaker at clubs, schools, organizations. His maternal Grandmother, Maxie Elizabeth Lowe, was a Daughter of the Confederacy.

He retired from the North Carolina Retirement System in July 1978.

Aside from his accomplishments as an Educator, both public schools and college-level, Howard:
developed a North Carolina housing subdivision and built his own home,
once held a pilot’s license,
owned his own company, Hickerson Engineering, and
served as a Caregiver to his wife during her forty-three year cancer battle,

Howard was a lifelong Methodist, Democrat, and Rotarian. He was a member of the Fairfield Glade United Methodist Church. He was a Staffer on Jimmy Carter’s Presidential Campaign and attended the inauguration. Howard was a Rotary Club President and received a lifelong membership in Rotary after his move to Dominion Assisted Living in April 2019. He asked his Sister, Vicky, often where he was going to vote in the 2020 election because he had moved to Alabama. He jokingly said, “Remember, I am a Democrat and I vote as often as I can in every election.” Then, he would grin and wink.

Once diagnosed with Alzheimer’s Disease, he kept his mind active with Bible Trivia nightly playing with his Brother-in-Law, Richard.

A grave-side service will be held at a future date. Interment will be for both Howard and Judy near family plots at West Union Cemetery in Millington, Tennessee.

In lieu of flowers, donations may be made to the following in Howard Hickerson’s memory:

To plant a memorial tree in honor of Howard Hickerson, please visit our Heartfelt Sympathies Store.

Receive notifications about information and event scheduling for Howard

Print
The Family will have a private memorial at a later date.

We encourage you to share your most beloved memories of Howard here, so that the family and other loved ones can always see it. You can upload cherished photographs, or share your favorite stories, and can even comment on those shared by others.

Plant a Tree in Memory of Howard
Plant a tree 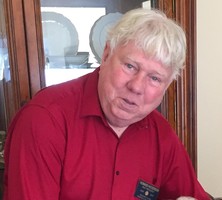