To share your memory on the wall of William Hayes, sign in using one of the following options:

On Sunday, June 11, 1967, William Thomas Hayes entered the world with a strong cry announcing his arrival, and from that point on, he was loved by family, friends, and associates.

On Sunday, June 11, 1967, William Thomas Hayes entered the world with a strong cry announcing his arrival, and from that point on, he was loved by family, friends, and associates.

Born to proud parents, Laura Cornelia Hayes and Charlie Matthews, Jr., William was preceded in death by both parents and one sister, Nina Delores Hearne-Hopkins.

William was educated in the Huntsville City School System and was a graduate of J.O. Johnson High School. He furthered his education by receiving an Associate’s degree from Calhoun Community College.

William had a strong work ethic from an incredibly young age and was always sharpening his body and mind. He began learning the art of Taekwondo at an early age and continued his training to become an instructor. In that same vain, he joined the United States Marine Corps (Semper Fi), serving for four years, and upon his return home, he applied and was accepted to the Huntsville City Police Department, a job he loved, but, because he desired more, William opened his own investigation firm, HEI Investigations, which he operated for more than twenty years. In this business, he provided private security for some high-profile entertainers and security for local businesses. William investigated many cases for local attorneys and private individuals, as well. William was an avid poker player and could be found playing in tournaments around the world, and he loved to travel, both domestically and internationally. It was a life well-lived.

To send flowers to the family or plant a tree in memory of William Hayes, please visit our Heartfelt Sympathies Store.

Receive notifications about information and event scheduling for William

We encourage you to share your most beloved memories of William here, so that the family and other loved ones can always see it. You can upload cherished photographs, or share your favorite stories, and can even comment on those shared by others.

Love Jemere sent flowers to the family of William Hayes.
Show you care by sending flowers

Posted Jul 03, 2020 at 08:47pm
Will... you have been an amazing friend for many years. The advice, support and care you gave is unmatchable. My children and I will always cherish every moment. You were loved kind friend. Until we meet again on the other side...
Comment Share
Share via:
SF

Posted Jun 25, 2020 at 08:50pm
I am in pain and disbelief as I attempt to offer my words of condolence. William was a brother. We shipped out to Marine Corps Boot Camp on the buddy program along with Dion Turner and Malcolm Pope. Our lives were forever intertwined from there. Soooo many stories. This hurts. I offer my sincere condolences to his family, children and other friends. Gone far too soon but he left an indelible mark in my life and undoubtedly the lives of countless others.
Semper Fidelis brother.
-Shawn
Comment Share
Share via:

Posted Jun 25, 2020 at 01:33am
To the Hayes Family may God comfort you. So sorry to hear your loss of our friend William. Peace be with you, The Powers Family (Robert Powers, Darryl Powers).
Comment Share
Share via:

Posted Jun 24, 2020 at 10:12pm
My deepest condolences to the Hayes family . My longtime friend , you will truly be missed. Your friends and brothers ( William Wiggins , Michael Bone , Chris Malone , Calvin Grizzard , Otis Burwell ) See you at the waterfalls .
Comment Share
Share via:

This post was sent by William Wiggins , Using my wife's platform .
JT

Posted Jun 23, 2020 at 08:06pm
You were my brother, my friend, and my guide. Only God may know why! My. Sincere condolences to the entire family. May God continue to comfort and bring peace to the broken hearted!
Jean Tanner, Rockford, IL
Comment Share
Share via: 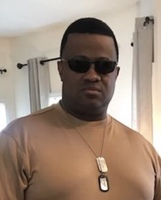