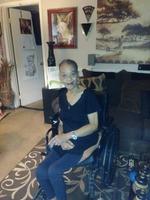 Mrs. Dorothy Louise King was born on May 7, 1952, to parents Alvin and Frankie Johnson. She left this life to return to the open arms of her creator on September 3, 2020.

Dorothy was born in Chattanooga, TN, raised in Scottsboro and later moved to Huntsville which she made her home.

Dorothy never met a stranger and will always be remembered for her big smile and sense of humor.